(And about our passion for information technologies)

Here at RIOSA another of our passions is the systems engineer and computers. Not in vain our first website It started working in 1995, just 6 years after the inventor of the World Wide Web concept, Tim Berners-Lee will create the first web page using the protocol Hyper Text Trasnfer Protocol (HTTP) in 1989 in the CERN on the border of Switzerland and France, near the city of Geneva.

By that year, 1995, web pages in Spain were very scarce, and were practically reduced to universities and other official institutions. Private or company websites were practically non-existent, so that effort was only an improvement exercise, since its useful effect (visits to our page to publicize our company) were scarce until several years later, when the The use of information technologies spread to the entire population and therefore to the industrial and livestock sectors.

Even so, that effort showed by that time how much we cared about R & D in our company. 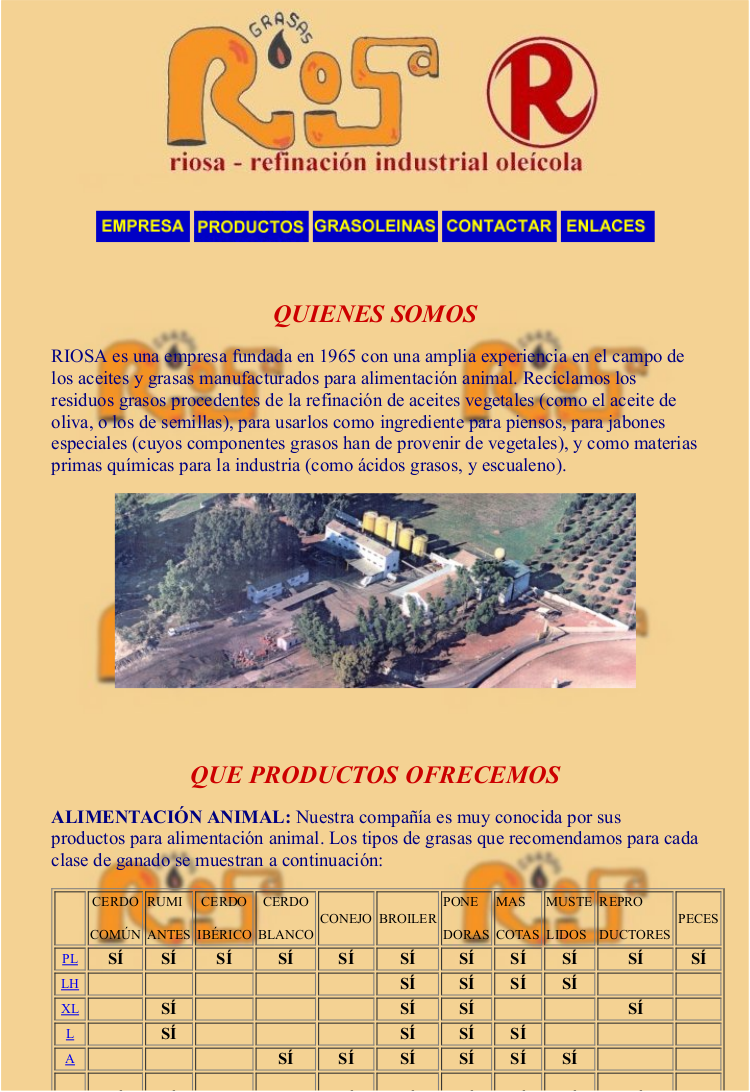 Our web services have always been based on our own servers physically housed in our facilities, inheriting the philosophy of 1995, when the concept of "cloud" did not exist, and external web hosting services were scarce and expensive. Thus we have retained our preference to maintain within the company all the services we provide abroad, which gives us enormous control over them, and makes it easier for us to comply today with the rigorous and necessary requirements of the data protection laws, since the data of our clients are not transferred to external web hosting services, which implies agreements with other companies, often multinationals and too big structure to worry about the needs of a Spanish SME.

This philosophy requires us to maintain an expert team of IT employees to maintain and update our internet services, but from our point of view it is more efficient than delegating the maintenance of those services to external multinationals.

Also in the IT team we have always believed in the philosophy and the use of free software, and in free operating systems, especially in the system GNU / Linux. We use them extensively in all our servers, workstations and applications, and we promote their use whenever possible. The flexibility, freedom and efficiency that is achieved with the use of solutions based on free software believe that it is not comparable to any other solution on the market.

In an informative way we detail on the right links of only the most important pieces of software that make this web possible.

This website uses cookies to improve your experience while you navigate through the website. Out of these, the cookies that are categorized as necessary are stored on your browser as they are essential for the working of basic functionalities of the website. We also use third-party cookies that help us analyze and understand how you use this website. These cookies will be stored in your browser only with your consent. You also have the option to opt-out of these cookies. But opting out of some of these cookies may affect your browsing experience.
Necessary Always Enabled
Necessary cookies are absolutely essential for the website to function properly. This category only includes cookies that ensures basic functionalities and security features of the website. These cookies do not store any personal information.
Non-necessary
Any cookies that may not be particularly necessary for the website to function and is used specifically to collect user personal data via analytics, ads, other embedded contents are termed as non-necessary cookies. It is mandatory to procure user consent prior to running these cookies on your website.
GUARDAR Y ACEPTAR
%d bloggers like this: